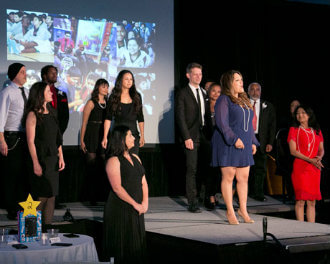 On Monday, March 21, ET hosted a special event at the Pasadena Convention Center to celebrate their 30th anniversary. Gerry Farrell, director, Kaiser Permanente Southern California Educational Theatre, opened the event with a short video that compiled some of ET's earliest recorded performances through some of their more current offerings, illustrating the depth and evolution of their work through the decades.

"The work [ET] did in Santa Ana is remarkable," said Patrick Yrarrazaval-Correa, former principal, Valley High School in Santa Ana, California. "Helping students avoid STDs and early pregnancies is the greatest gift," he added. "Our pregnant and parenting classes' population dropped by 20 percent at Valley High, and the ET programs reached over 40,000 students and parents in Santa Ana."

At one point during the event, the actor-educators gathered on stage to share stories that illustrated the positive impact the programs have had, not only on the lives of the audience members, but also on their own lives.

“When you think about how we influence lives in different ways, it is almost as important as the one-on-ones in the doctor's office.”

Theatre is a powerful medium. Studies show that people relate emotionally, psychologically and mentally to characters played by real people better than they relate to words on a page. ET uses the imagination, interaction and immediacy of theatre to empower and inspire audiences through stories and modeling of positive behavior.

Learn more about Kaiser Permanente's Educational Theatre, and about opportunities to join this talented group of inspiring individuals.

To read the full article and many others, explore our Share site.

See What People are Saying About Working at KP

Thanks
to Our
Employees

Kaiser Permanente has been named one of the 2019 Best Places to Work. Check out what our employees like best about working at KP!

Connect with a member of the Kaiser Permanente team at an upcoming career or professional event. We look forward to seeing you!

Sign up to receive information about opportunities that relate to your interests.