Kandy greets the children and their parents as they check in for surgery with a sassy puppet wearing miniature scrubs and a badge identifying her as Mona Phielgud, MD. Kandy and her co-worker, Suman Singh, also started handing the kids a goodie bag with a stuffed bear, crayons, and a custom coloring book titled, "Today is Your Operation!" Kandy drew most of the drawings in the 20-page coloring book with an eye toward easing pre-surgery jitters.

"It's really an educational thing for the kids and the parents because it walks them through the steps before, during, and after surgery," she explained.

The coloring book pictures animals as patients going through the surgery process: there's a monkey getting his blood pressure taken before surgery, a rabbit being wheeled down a hall on a stretcher, and a duck waking up in the recovery room.

The idea for the coloring book came to Kandy two years ago when a young surgery patient arrived in such a state of anxiety that staff couldn't get him through the doors to the pre-operative area.

“We all went above and beyond to try to get him to come in,” she said. “I thought, maybe it would help if we had something to distract him.”

Kandy, who has no formal art training but describes herself as "very creative," started by drawing a gingerbread man. She then copied the picture and handed it out to young patients to color. Over time, she created the series of pictures that help children understand what's involved in their surgery, and those pictures took shape as today's coloring book.

"She saw the need, found the solution, and thought, I'm creative and I can do that," Martini said. 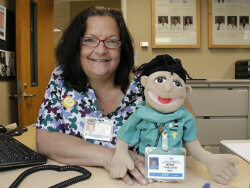 When Kandy doesn't have patients, she walks back into pre-op with her doctor puppet and manages to turn patients' anxious looks and tears into smiles and laughter. After surgery, when the kids are ready to head home, she and her puppet present them with a certificate of bravery, which she also created.

And Kandy said she's happy to have the chance to help put kids at ease.

"I love making people smile," she explained. "It just makes me feel so good to help our patients feel less nervous, and to make them feel more comfortable with us."

Want to make a positive impact on someone's life in your career? Explore openings to join our team today.

You can read the above article in it's entirety here.

See What People are Saying About Working at KP

Thanks
to Our
Employees

Kaiser Permanente has been named one of the 2019 Best Places to Work. Check out what our employees like best about working at KP!

Connect with a member of the Kaiser Permanente team at an upcoming career or professional event. We look forward to seeing you!

Sign up to receive information about opportunities that relate to your interests.